Urban growth is a major phenomenon of the Urbanocene1 era, which is taking place globally on an unprecedented scale, and whose effects on society and the environment are evident. While cities occupy only 2% of the planet, they contribute up to 70% of the world’s carbon emissions and 60-80% of its energy consumption. Moreover, the United Nations predicts that the world’s urban population will increase by 75% by 2050.

Consequently, failure to adapt to the new urban reality could be disastrous for cities facing these demographic, economic, social and environmental pressures. Over the past 10 years, smart urban technologies have begun to conquer our cities to form the backbone of a broad and intelligent infrastructure, the so-called smart city. Alongside this development, the spread of the sustainability concept has had a significant impact on the planning and development of our cities.

Despite strong criticism for this type of urban design and development practice, there is a general feeling among researchers that it is good to rethink the paradigms and processes for planning and developing our cities.

What is a smart city?

An intelligent city, commonly referred to as a smart city, is a framework primarily composed of information and communication technologies (ICTs) with the aim of providing useful information to effectively manage resources and assets and thus meet the challenges of urbanisation.

A large part of this ICT framework is essentially an intelligent network of connected objects and machines that transmit data using wireless and cloud-based technologies. Cloud-based applications receive, analyse and manage data in real time to help municipalities, businesses and citizens make better decisions that improve quality of life.

The improvement argument is that the smart city, which interacts with its citizens, is better prepared to respond to contemporary challenges than a city that only has a transactional relationship.

In order to improve the urban environment, the smart city must therefore respond to several challenges: 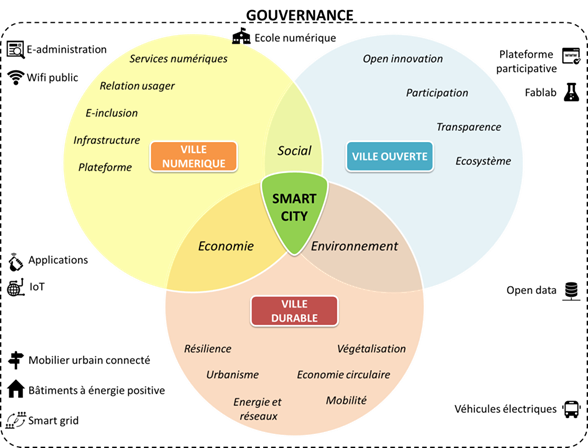 In the late 2000s, the smart city was seen as a promising market by IT companies Cisco and IBM. Through marketing campaigns, they imposed the idea that a new paradigm should renew the way cities are managed in order to transform them into “smart cities” and meet the challenges of urbanisation. In order to face these problems, these companies position themselves as “gateways”4 and propose technological solutions that allow urban systems to be interconnected through data.

However, their model is based on a holistic and systemic vision of cities. These manufacturers, notably IBM, are proposing a decompartmentalised management of urban infrastructures thanks to data from different technical systems5. In fact, the Inception of the smart city was a dazzling failure, due to a reductionist approach to the city which promised a simple, rational and efficient solution to a whole range of complex urban issues. This technicist vision, however, masks the great diversity, local specificities and complexity of the cities with which IT firms have been confronted.

Thus, a technopole city will not necessarily be considered a smart city. The role of technology in smart cities should be to enable the sustainable development of cities, and not to consider new technology as an end in itself. Ultimately, a city that is not sustainable is not truly smart. It is precisely the inclusion of sustainability that will be able to give full meaning to the potential of the smart city.

Smart city: a road to the sustainable city?

The smart city, in this sense, promotes the objectives of sustainable development because it allows :

It is on this last point that the smart city framework is the most promising, particularly through smart grids. A smart grid is an electricity distribution network that promotes the circulation of information between suppliers and consumers in order to adjust the flow of electricity in real time and to enable more efficient management. As electricity cannot be stored easily, quickly and economically in large quantities, smart grid technologies seek to adjust the production and distribution (supply and demand) of electricity in real time by prioritising consumption needs6. As a result, smart meters will correct demand by taking into account the volumes used by the user. The smart grid improves the energy efficiency of the whole system by minimising line losses and optimising the efficiency of the production means used in relation to the instantaneous consumption.

According to the US Department of Energy, if smart grid technologies made the US power grid 5% more efficient, this would be equivalent to the greenhouse gas emission savings of 53 million cars, and the grid improvement from these technologies is expected to save $46 to $117 billion by 2023. In Taiwan, the Taiwan Power Group, the island’s leading energy company, believes that smart grids are the only way to “bypass human laziness”, estimating that it can save 10% just by automatically managing standby equipment, and a further 10-20% by doing the same with air conditioning8.

In this complex world that is taking shape before us, the externalities that arise from these projects are tangible in terms of new mobility, eco-citizenship, the circular economy and resilience. Although the digital divide is still prominent, the need to accelerate the implementation of operational and efficient solutions is present in an era of increased urgency.

Tell us about your project

Sign up for our exclusive newsletter to get the most imporant updates on policies, innovations, and goals in the field of sustainability and energy for the real estate industry.